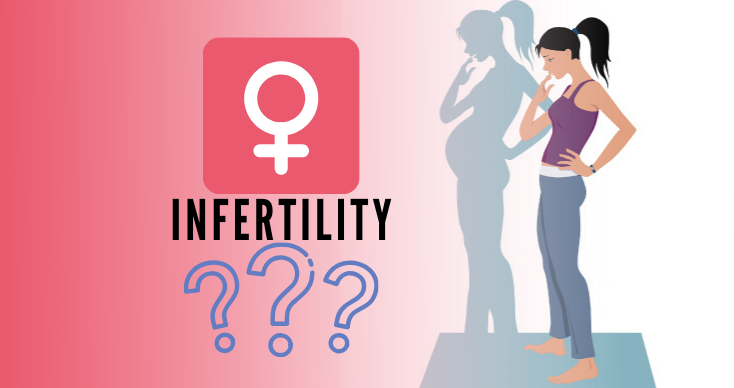 Infertility means being unable to conceive children. In this blog, we will mainly focus on female infertility. In basic words, female infertility is the incapability to conceive a baby even after numerous unprotected sexual intercourse with a fertile partner. There are many reasons responsible for infertility in women. To be on the safer side, regular visits to the gynaecologist should become the norm of every married or unmarried woman. You need to look for these below-mentioned signs and symptoms to find the status of your fertility. Here are some signs and symptoms related to infertility:

Let’s find the causes responsible for infertility in women.

We will now throw some insight on diagnosis and treatment available for known causes of female infertility.

We, at ILS Hospitals, provide a precise diagnosis and necessary treatment for female infertility. Book an online appointment for medical consultation from our expert gynaecologists in kolkata.

Having progenies ensure the continuity of the human race on Earth. But lately, several people are coming up with the problem of infertility. Both males and females are suffering from it these days. You can find out the main reason for infertility among women here, for which one should consult a gynecologists.

Though we have one perk regarding potential fatherhood has over motherhood. That is, the age of the father is much less of significance against the age of the mother. This might look like a major advantage. However, the problem of fertility has increased among men alarmingly.

Here are some of the reasons for the same:

Having weight more than one can manage is always harmful for health. Recently, several studies have found a close relation between men being infertile with being obese or immensely overweight. Apart from physical difficulties, the extra weight also negatively affects the fertility factors significantly.

Following a sedentary lifestyle such as huge consumption of alcohol and other drugs can cause low sperm count. Also, the long working hours and work related stress, effects these factors largely.

Though a skilled gynecologist can trace this problem, it is always advised to seek a doctor’s expertise in handling infertility cases.

Even though the occurrence of UTI in men is much less as compared to female, having a UTI can affect fertility. Especially recurring UTIs possess more severe threats.

Several of the men in both rural and urban regions often gets indulged with multiple partners. No matter how careful one is, this practice can cause STDs. Though, some of the STDs are resolved with medications, while few others have catastrophic results and infertility is one of them.

Several diseases that might have affected in prior life may leave some traces of several problems in the future. This includes trauma, hydrocele, mumps, malaria, cryptorchidism, testicular cancer and several other.

Numerous physical activities like, bicycling and horseback riding that demand vigorous movements, can also have an adverse effect on the fertility of men. Additionally, sports like cricket, football, wrestling and other martial arts may also increase the risk of any accident that can directly or indirectly cause infertility.

Wearing supportive and protective garments during these activities mitigates the risk up to a large extent.  Thus, staying in good health is essential for personal reasons and also for ensuring a safe parenthood.

Infertility is a condition of not being capable of conceiving a baby naturally. The problem of infertility is increasing among women in India lately. Know what reasons might be acting as the prime cause for it.

Our children are our future. But nowadays, lots of women are coming up to gynecologists with the problem to conceive a child naturally. Infertility is the medical condition, in which a couple fails to conceive a baby naturally even without any birth control means. The reason for the same could either be due to biological constraints in men, women or a combined factor of both.

The problem in on rise, especially since a past few decades. In fact, a rise of 30-35 percent of infertility has been recorded in the past 10 years.

According to the gynecologists in Kolkata, the following reasons are the prime factor for causing infertility in women-

The consumption of alcohol or smoking regularly can cause an abrupt disturbance of the hormonal balance in the body. Not getting enough amount of a sleep, having persistent stress, spending too much time on TV and other electronic, lack of yoga or physical exercise etc., also comes under the sedentary lifestyle. The environmental pollution that we remain exposed to also act as a factor.

Having poor nutrition for a long time can either result in being obese or extremely underweight. Though being obese directly does not cause infertility, but it causes hindrance in terms of irregular periods, insulin resistance, sexual incompatibility etc. Being in any of the extreme side of weight zone can cause serious trouble for conceiving.

During the past decades, women are more career oriented than they used to be earlier, due to improvement in social and emotional context. These days, most of the educated women aim to establish their professional lives before settling down or having kids. Thus, by the time they are ready to start a family, they cross the threshold age limit and the fertility begins to decline significantly.

The concept of monogamous relations in India is largely getting diluted. These days, several women engage themselves with multiple partners, which leads to sexually transmitted infection and thus the fertility gets affected in a negative way.

Some women are born with a rare medical condition which makes them incapable of bearing any kids naturally. This can either be conditions where the woman is born without a uterus or having sterile reproductive organs.